From F-Si wiki
Jump to navigation Jump to search

A standard-cell can be looked at from different abstraction views:

Usually, some of the views are given by design and others must be derived. For instance, the logic function of a NAND gate could be defined as "!(A & B)". In principle all other views can be derived from this equation using some additional assumptions and constraints depending on the technology and design goals. The netlist of combinatorial cells can be generated algorithmically (TBD: reference). Starting from the netlist a layout will be drawn which can be used to extract parasitic capacitances and resistances within the cell. The resulting netlist of transistors and parasitics can further be used to get an abstract description of the cells timing, power and noise behavior.

A way to derive timing and power numbers is simulation of the transistor netlist. However, one simulation is not enough because the cells behavior strongly depends on other factors such as PVT (process variations, operating voltage, temperature), input wave form and output load. A common approach is to look at best and worst PVT conditions. Effectively this allows to predict lower and upper bounds on the cell behavior which are important to ensure the overall functionality of the design. Further, cells must be characterized over a reasonably large range of input edge rates and output load. For example, a cell could be characterized on a two dimensional grid with variable input edge rate and output load (non-linear delay model). If the grid points are chosen correctly then the behavior between grid points can be approximated by linear interpolation.

The 'liberty' ('.lib') file format is often used to store library information such as logic functions of cells together with their timing behavior. One liberty file will contain information of multiple standard-cells (library). It is common to have multiple liberty files for the same library: One for each PVT corner. The most basic setup could consist of two liberty files: A worst-case file (low voltage, high temperature, worst case delays, ...) and a best-case file (high voltage, low temperature, ...).

Timing views of standard-cells typically consist of delays (time between a change in input and change in output), edge rate and constraints (setup, hold, recovery, removal).

Timing measures require to define events that can be used to measure delays. Usually such an event is defined by the instant a signal crosses a given threshold or trip point. Different trip points can be used for delays and edge rates. It is not uncommon to also use different trip points for rising and falling edges. By appropriately choosing trip points that are further away from 50% one can get extra timing margins.

The following snipped shows the trip point definition in the liberty file of the FreePDK45:

The timing behavior from input to output usually depends not only on the input port but also on the levels of the other inputs. For the characterization process this means that all input combinations must be considered. The liberty file format allows to store timing information conditional on other inputs. However, during circuit synthesis the input signals are not known and synthesizers rely on a default timing arc. The choice of the default timing arc depends on the characterization corner. For combinatorial gates the longest timing arc should be chosen for the worst-case (setup) corner and the shortest arc should be chosen for the best-case (hold) corner. Even if not used by the synthesizer conditional timing arcs might still be useful for post-layout simulation (e.g. verification of clock domain crossing) and power analysis because glitching will be modeled more accurately.

The point of characterization is to create abstract representations of a physical device's behavior. The general approach is to find a mathematical model that allows to describe the behavior with the required accuracy. For each device the model is fitted to parameters that have been measured in a simulation or in physical experiment. Below is a incomplete list of common model types. 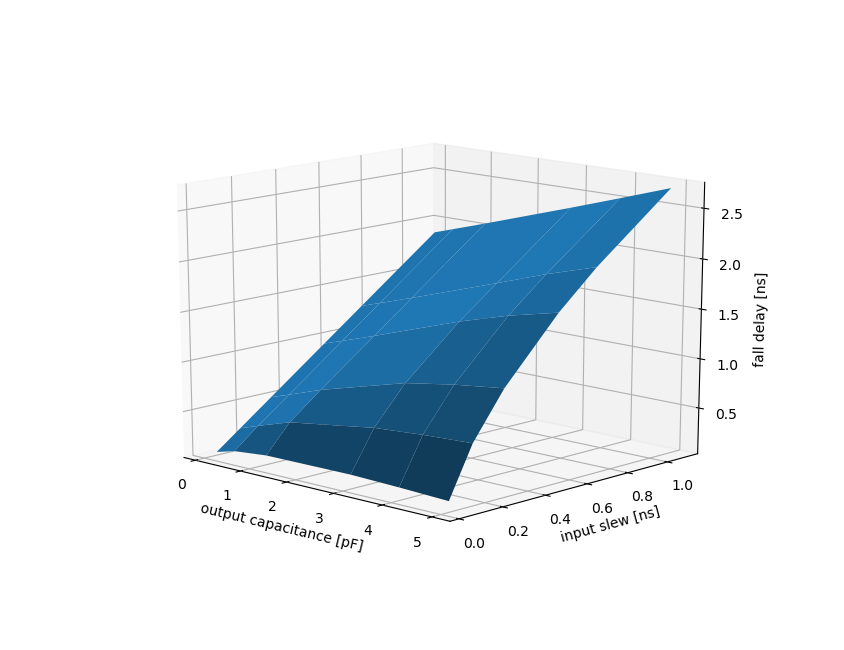 Non-linear delay model: Fall delay of a XOR2X1 cell (FreePDK45) evaluated on a grid of different output loads and input slews. Off-grid points can be evaluated by linear interpolation.

Grid points and bounds need to be chosen such as to minimize the approximation error. The grid bounds are therefore given by the parameter ranges that are expected to appear in a design. For a delay model the minimum output capacitance could be chosen by the smallest input capacitance among all cells whereas the maximum output capacitance could be chosen to be the largest capacitance that can be driven with the strongest cell such that the resulting edge slope is still acceptable. The maximum output capacitance may also be defined by electro-migration rules of the PDK. The minimal input slew can be simulated by applying a step-function to the strongest inverter available in the library and measuring its output slew. The maximum input slew will be given by the weakest cell driving the maximal acceptable output load. Note that the grid bounds should be consistent over the library. At least cells of the same drive strength class should share the same grid bounds to avoid erroneous extrapolation when comparing cell delays during synthesis.

The following algorithm illustrates how a low number of grid points can be chosen while ensuring an upper bound of the approximation error:

TBD Similar to the non-linear model but instead of output voltage the output current is measured and stored. 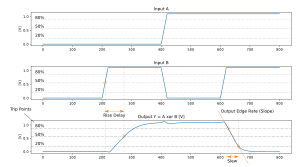 Input and output waveforms of a XOR2X1 cell (FreePDK45). The delay from B to Y is measured from the instant B crosses 50% to the moment Y crosses 50%. The (falling) output slew is defined by the time it takes for Y to fall from 80% down to 20% as illustrated by the orange line.

Setup and hold times are constraints and in contrast to delays they cannot be measured by a single distance measurement. To find either setup or hold time multiple simulation runs are necessary whereby the data edge is moved towards the clock edge until failure of the storage element is detected. Instead of moving the signal edges it is much more efficient to do a bisection search in practice. 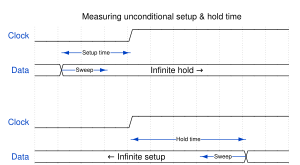 Measuring setup and hold constraints by sweeping the data edge relative to the clock edge. 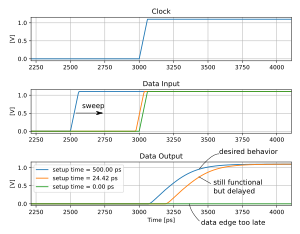 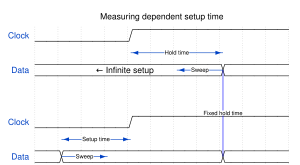 Measuring dependent setup time by first measuring the independent hold time and fixing it during the setup time sweep. 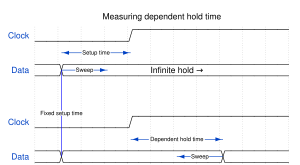 Measuring minimal setup and hold time independently will result in a too small setup/hold window. Simulations with fixed setup time will show that the setup time pushes the hold time away from the clock edge and vice versa.

Failure of a storage element regarding setup and hold time is a matter of definition. The most obvious type of failure happens when the input signal is applied in a way that the storage element fails to sample the data. When pushing the data edges closer and closer to the clock edge one can observe that the propagation delay steadily increases before the sampling totally fails. The output signal is pushed out by the approaching input signal. Increase of the propagation delay should also be treated as a failure because it could endanger the constraints of the following longest path.

The maximum allowed push-out time must be chosen carefully. If it is close to zero, then large setup and hold times will be chosen which minimizes the clock-to-output delay but decreases the maximum clock-frequency of a circuit. Choosing a large maximum allowed push-out time leads to shorter setup and hold times but may cause actual setup or hold violations or meta-stability issues in a design.

As a starting point it might be interesting to find setup times such that the sum of setup time tsu and resulting clock-to-output delay td is minimized (same for the hold time). This implies that dtd/tsu = -1. This describes the point where the plot of clock-output-delay versus setup time has slope -1. 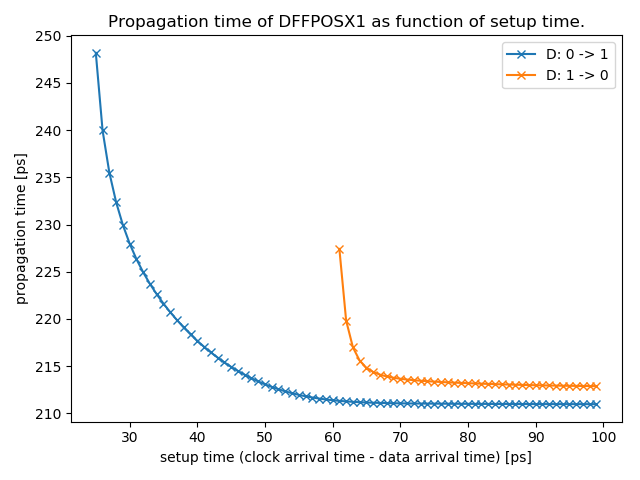 Propagation delay of a D flip flop as a function of the unconditional setup time (infinite hold time).

Setup and hold times cannot be found independently. Measuring minimal setup and hold time independently will result in a too small setup/hold window. Simulations will show that the minimum setup time pushes the hold time away from the clock edge and vice versa as shown in <xr id="fig:indep_and_dep_setup_hold_time" />. This effect can be significant. For this reason setup and hold times should not be measured independently. There are trade-offs to be made: If the setup time is chosen as small as possible, then the dependent hold time will need to be significantly larger than the minimal hold time in order to meet the desired clock-to-output delay. For some applications it might be interesting to know the minimum setup+hold window which likely does not correspond to the independent minimal setup and hold times. In other words there are three interesting minimization objectives (but many possible trade-offs in between):

Minimal setup+hold is the narrowest time window where the data signal must remain stable such that it is properly sampled by the flip-flop, i.e. the clock-to-output delay is bounded by the desired output delay.

Finding minimal setup+hold such that a desired clock-to-output delay is met can be done as follows:

Express the setup and hold times in terms of a time window of a certain width and with a center shifted by some amount relative to the clock edge.